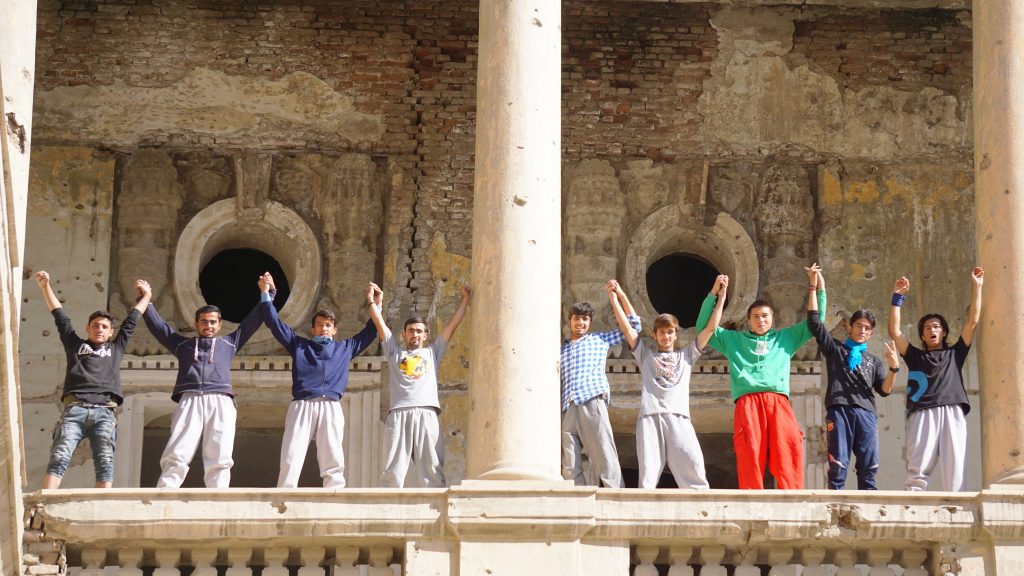 Afghanistan’s youth is rebelling against economic and social ruin. In the capital Kabul a group of youngsters joined together using their whole bodily strength to run into a new future.

Something is changing in Kabul. A group of youngsters refuse to accept a status of unemployment and a hopeless future. The Kabul Parkour Boys – Afghan pioneers of the acrobatic type of sport called parkour – are using the ruins of the former presidential palace as a training ground. As Kabul’s little sensation they have even already appeared on national TV. During our trip trough Afghanistan we have spend one exciting day with those moving survival artists.

For six years now the Kabul Parkour Boys are training together crossing the whole city. When doing Parkour the aim is to overcome urban obstacles with acrobatic movements; more precisely, practitioners want to get from one point to another using their body in the most efficient and creative way. With breathtaking speed the colourfully dressed boys are spinning through the abandoned rooms of the palace, climbing crumbling walls doing back flips – a powerful contrast program to economic stagnation, hopelessness and the dreariness of the war.

Most of the time the group trains at the ruins of the Darul Aman Palace. Build in the 1920s by King Amanullah originally the Western style palace was supposed to host the parliament. But the rise of his King’s enemies soon thwarted Amanullah’s plans of modernisation. After being severely damaged in 1969 by a big fire, the building was never inaugurated again. The name of palace – literally meaning ‚The Abode of Peace’ – is also the motto of the Parkour boys. 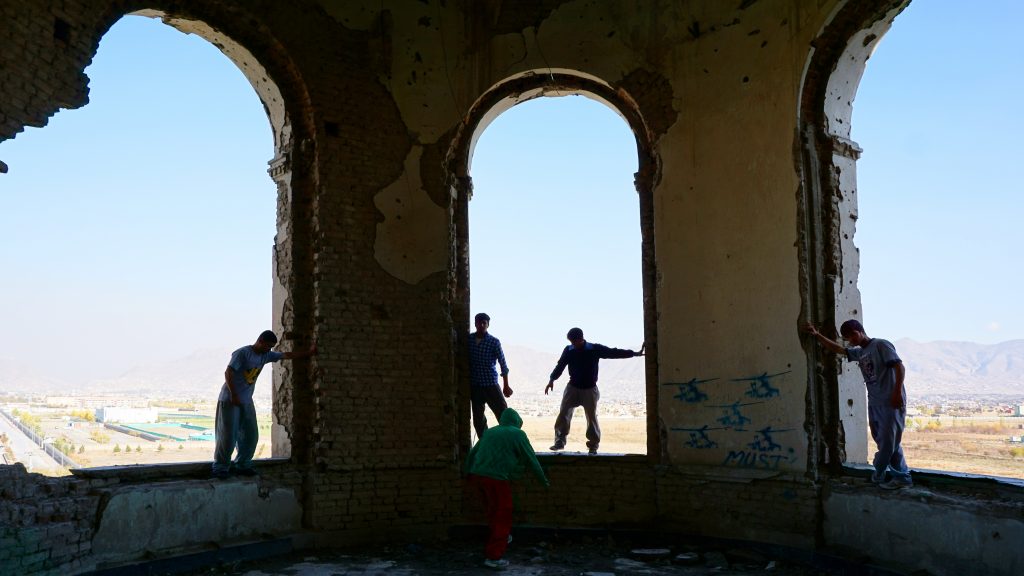 Growing up with a lack of prospects

Afghanistan is struggling with problems that according to Western standards characterise many of the least developed regions of the world: a chronically weak economy, a rapid population growth and a deficient social system. Many young Afghans can not look into a bright future. Two thirds of the population are under 25 years old, almost eight out of ten youngsters name unemployment as their worst concern. A report published by the Afghan government and the UN uncovers the alarming effects of the hopelessness: Nowhere on the planet so many opium is produced, nowhere so many young people are making use of the countries own drug production.

Mobility as a survival strategy

For decades mobility and movement have been Afghan survival strategies to escape from war destruction and personal insecurities. In a survey of the international broadcasting companies ARD, BBC and ABC almost half of the Afghans indicated that they did not feel sufficiently protected from the Taliban during war times when international troops where stationed at Afghanistan. According to the United Nations Assistance Mission the security situation further aggravated after the withdrawal of the international troops since 2011. Consequently, foreign investors and trade companies stopped their cooperation with Afghan businesses, international sources of capital were drying up and unemployment increased immensely.

Contrary to the prevailing scenario of threatening waves of refugees – mostly fuelled through the news coverage of Western media – the movement of the Afghan population mostly remains internal migration. 30 percent of the Afghan population are living in cities. Even though the situation is the most precarious in rural areas – especially for women – the living conditions and competition for scarce jobs are also getting worse in urban centres. Jamil, one of the founders of the Kabul Parkour Boys told us: “Half of our group is unemployed, studying or still goes to school.” What the future may be like? Nobody knows that. 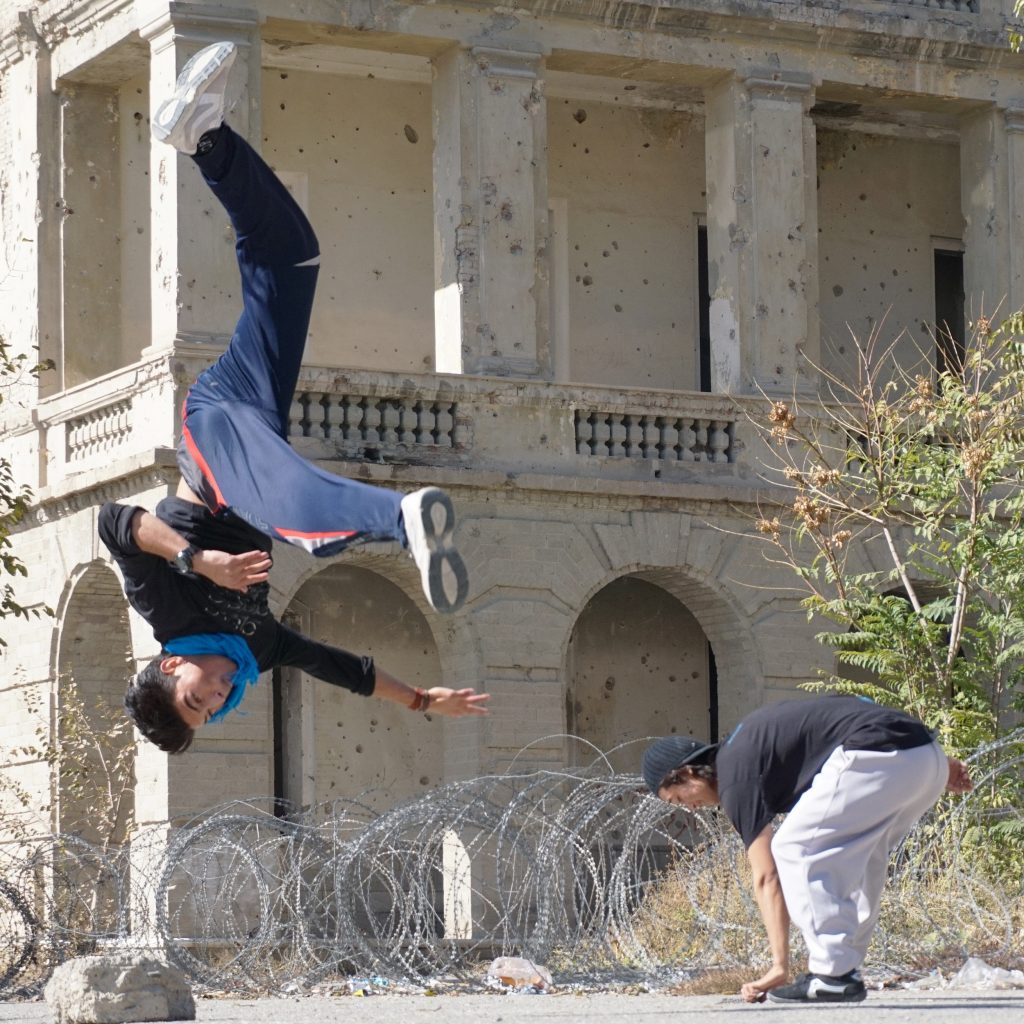 Those who do not move, do not notice their chains.

Nevertheless they want to show the world that that Kabul has more to offer than the terror, war and drug trafficking constantly communicated by the media. They do Parkour to change their world. Jamil: “We train hard everyday in this dangerous environment. With Parkour we want to give the youth of Kabul the possibility to do sports without being a target for attacks. Parkour has become our life and with it we want to build up our future, to inspire Afghan Youth.”

Until now the group does not have any sponsor. Therefore one important aim is to collect donations to buy equipment and rent a sport facility that makes it possible to train even with adverse weather conditions. More importantly, this would enable Kabul’s girls to join them inside the protecting walls.

Thus far, the group doesn’t have any sponsor. That’s why it is an important goal to collect donations to buy equipment and so be able to train in a sports center, regardless of adverse weather conditions. Therefore making it possible for Parkour girls to also participate in the future.

The start of the donation series Make Saltos Not War was a charity dinner 5.Feb. 2017, whose net proceeds will be handed over to the Kabul Parkour Boys in Afghanistan by Conflictfood in November 2017. Conflictfood has brought all kinds of delicacies from Afghanistan and the team of the To Beef Or Not To Beef will conjure them into magnificent dishes. Prepare for culinary somersaults!